The Hunan Art Museum, located on the west bank of Xiangjiang River and under Yuelu Mountain, was established in 2012 and officially opened on September 28 on the eve of the National Day. It is currently the largest and most functional professional public art museum in Hunan Province. The museum was originally designed by the Shanghai Institute of Huajian Group. On the opening day, Yuan Jianping, chief architect of Shanghai Institute, attended the opening ceremony on behalf of the design unit. It is a “red pavilion” with a rough and powerful horizontal texture of the ochre red facade, which reflects the red flag flying in the square. During the National Day, the audience to visit the Hunan Art Museum came in an endless stream. They enjoyed it calmly and had zero contact with the art. The “clock-in” Art Museum became the holiday choice of many Changsha citizens.

“Let people look at your city and they can tell what its residents are culturally pursuing.? “-Sharinin 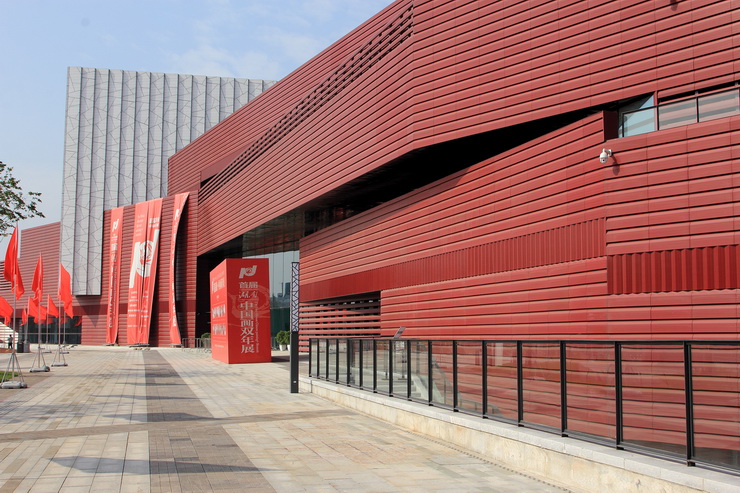 Architecture itself is a cultural phenomenon and a symbol of city culture. Walking at the forefront of cultural art galleries has further enlarged its spiritual significance. While the Hunan Art Museum is relatively harmonious with the overall environment of the city, it also highlights its personality, becomes a symbol of regional spirit, and becomes an art museum with Hunan characteristics.

There are many art public buildings planned on both sides of Xiangjiang River, forming a unique and strong cultural atmosphere, which is an important part of the city’s public space. The skillful integration of art galleries into the city’s space has become the key point of design attention. The building complex consists of two independent functions: Hunan Art Museum and Artists’ Home. The Art Museum provides display space for artistic works. Artists’ homes are mainly theaters, which carry out artistic dissemination. 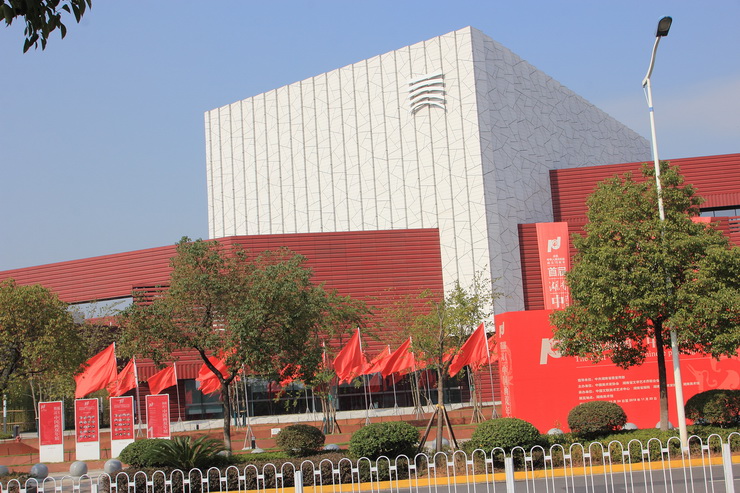 In the design of the architectural interface, it forms an introverted concession with the city, and the continuous horizontal broken lines form a multi-directional three-dimensional space, slowly folding the architectural form into a whole, and the closed but not tight visual intention slowly permeates the urban public space into the body blocks and the interior. 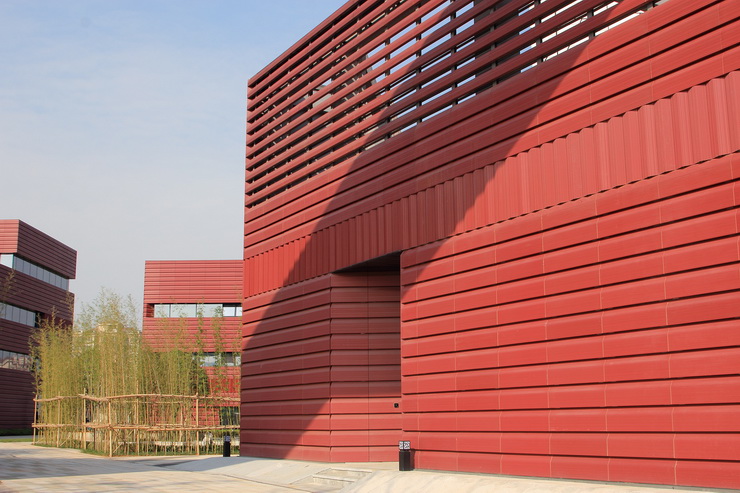 The mutual dislocation of the body blocks naturally forms a plurality of semi-enclosed courtyards, taking into account outdoor exhibitions and leisure activities. The multi-storey rooftop garden in the east is an excellent place to rest and think. Here, you can have a panoramic view of the beautiful Xiangjiang River. These open spaces interact with the outside space, bringing visitors a close and diverse feeling of the place.

3. Color and Light and Shadow

Speaking of Hunan, we always say “Red Hunan”. Red enthusiasm, enthusiasm and unrestrained are deeply hidden in the hearts of Hunan people. Bringing this typical color temperament into the facade image of the building, the whole building stands like vermilion printed sand on the river bank. In order to alleviate the visual influence of the shadow generated by the scattered body blocks on the whole building, the sun is used.

The change of light makes the relationship between the bodies appear smooth and powerful. 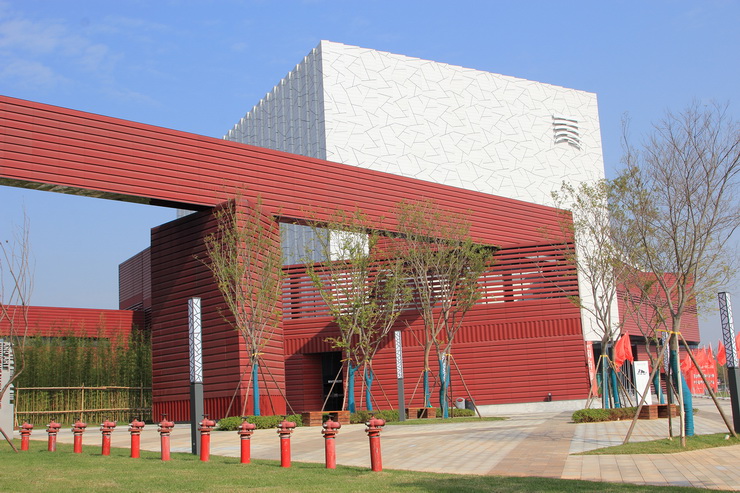 The red glazed terracotta panel used in a large area produce wonderful color effects in light and shadow through the advance and retreat relationship and the gap between actual and actual conditions. The glaze surface varies from end to end under the influence of sunlight. The red terracotta panel surface presents rich warm color system transition, and even the texture of the facade will vary with the change of light. During the marching examination, she brought a kind of flowing and shocking spiritual feeling to people. The white body block on the high place looks like the vertical folding form of calligraphy and painting rice paper from a distance, and the texture of fine ice cracks on the glaze surface from a close look. The glaze reflects the rich colors around, making the white body color changeable and deep, and interlacing with the red lines, forming a fusion carrier of architectural reality, hardness and softness, yin and yang. 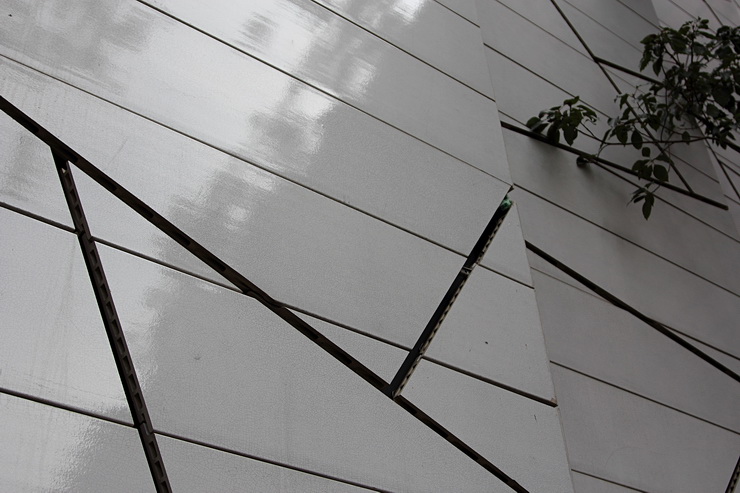 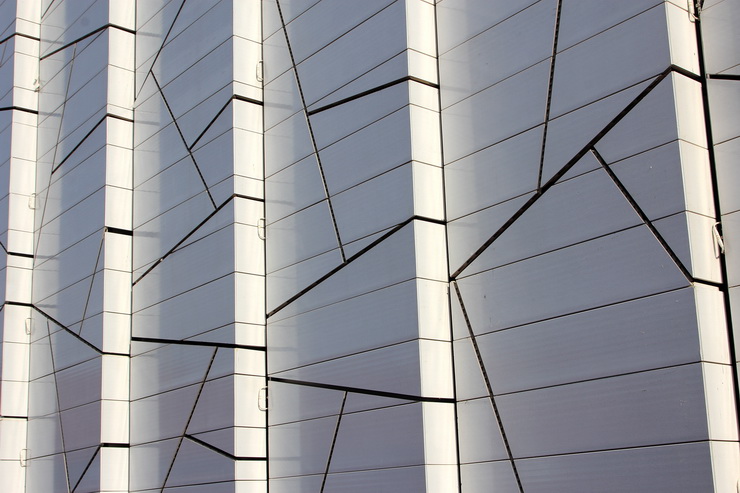